Netmarks PH subsidiary 3Q DASH TECHNOLOX, INC. was recently accepted as a Regular Member of the Japan Chamber of Commerce & Industry of the Philippines , Inc. (JCCIPI) – a prestigious organization of Japanese companies doing business in the country.

JCCIPI was founded in 1973 as a non-profit organization dedicated to fostering interaction among its members engaged in business in the Philippines. Among its members are the largest Japanese corporations involved in strategic industries such as energy, infrastructure, manufacturing, and trade. It is a member of the Philippines’ Joint Foreign Chambers (JFC) and maintains active dialogue with the Philippine government and counterpart local associations such as the Philippine Chamber of Commerce and Industry (PCCI), the Philippines-Japan Economic Cooperation Committee (PHILJEC), and others.
When 3Q Dash Technolox, Inc. was formed, its officers – Messrs. Philip Sanvictores (President), Raymond Sanvictores (Director), and Kambe Hirofumi (DNP Manager) – approached Mr. Matsunaga Keiichi, then President of JCCIPI (Mitsubishi Corporation Manila Branch General Manager), to introduce the venture, the first of its kind in the Philippines. Following that, the JCCIPI Board reviewed the company’s application for membership and approved it on July 20, 2022.
Following is the article published by the JCCIPI in its monthly magazine where 3Q Dash was introduced. 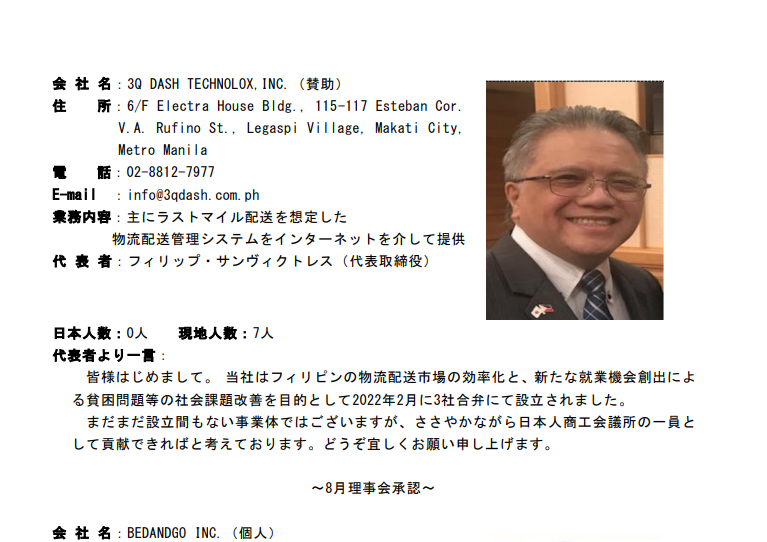 Nice to meet you all. We were established in February 2022 as a joint venture of three companies to help improve the efficiency of the Philippine logistics and last-mile delivery sectors, as well as create new employment opportunities eventually helping reduce poverty in the country.
Although we are a newly established business entity and still a minor member, we hope to contribute even modestly to the Japanese Chamber of Commerce and Industry of the Philippines. Thank you very much.